Cold teas and their preparations

HomeRecent ArticlesCold teas and their preparations 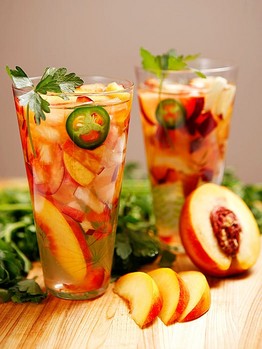 Cold teas are more popularly known as iced tea in most places. They are served with ice and could be or could not be sweetened. Iced teas are also well-known packaged drinks. They can be combined with flavored syrup such as peach, lemon, lime, raspberry, cherry or passion fruit. Although most teas obtain their flavor from real tea leaves, other beverages obtained from herbs and sometimes served cols are still called as iced tea.

Unsweetened iced tea is sometimes done by steeping tea leaves for a particularly long period at a low temperature such as under the sun for an hour. This is sometimes called as ‘sun tea’. Sometimes, they are left steeping on the refrigerator overnight.

In the US, cold teas compose around 85% of all tea consumed and are very well-known as a substitute to carbonated soft drinks, particularly in the warmer southern states. It is very common in convenience stores, grocery stores, vending machines and restaurants. It can be made fresh on the premises and also available in cans and bottles or at soda fountains. Most restaurants usually ask the customer of their choice – unsweetened or sweetened.

Iced tea is conventionally served with garnishing such as lemon and is frequently placed on the glass’ rim. In the southwestern part of the United States or even in restaurants with a southwestern theme, lime is also very well-known. It is very common for establishments to place slices of both lime and lemon for their customer to take for themselves.

Since there are various types of eateries in the US and also due to cultural and climatic differences, there are plenty of varieties of cold teas. Some of the most outstanding varieties include the following:

You can find here the best desserts ❤️ Open 8

Do you need a custom cake? We make cakes to order

What’s your favorite tea? Here we have differen

Our speciality tea is Rooibos, also know as red bu

In addition to excellent tea, you can find items t

All our decor is for sale. Exclusive items from S

The Silva Silva Spoon. Swipe left and check out

We have savoury preparations for a delicious lunch

How about some tea? We are waiting for you. Our

Team @the_silva_spoon to serve you in the best way

Friday combines with delicious preparations. Our

Items from our home to your home ❤️ For sale.

How about celebrating any special occasion with a